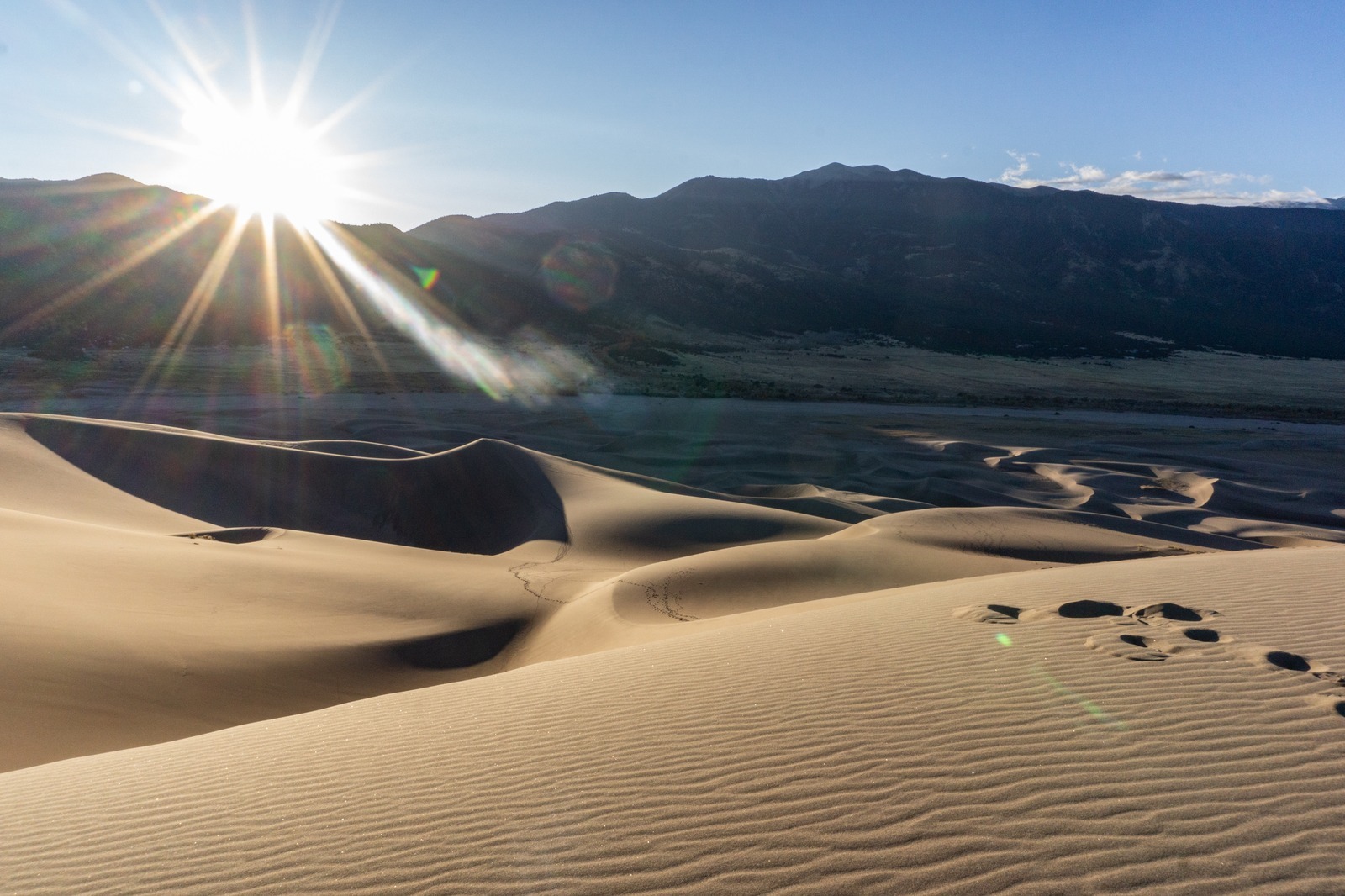 You are here: Home / National Parks / Alamosa: An oasis in Southern Colorado
We looked over at each other through our car windows and mutually nodded. It was the coldest part of night, right before the sun peaks over the horizon and begins warming everything up. I was up early on my way to Alamosa and had pulled into a parking lot at the base of The Great Sand Dunes alongside two other vehicles.

The temperature was below freezing. Reluctantly, we were all layering up to begin the hike up to what are the highest sand dunes in North America. Going at our own pace and on our own paths, we trudged up the dunes to await the sunrise with our cameras.  Hours later, after the sun had come up, a couple of us coincidentally arrived back at our vehicles at the same time. We nodded to each other again—this time with more warmth, fewer layers, and a greater appreciation for the outdoors.

A Sense of Alamosa Community

Continuing on from the dunes and the Sangre de Cristo Range I drove into Alamosa itself. It was now late morning and there was an excited energy in the air. It was homecoming weekend. The homecoming parade hadn’t started, but the community was preparing. Families and individuals alike were making their way toward the main street. They walked wearing the local colors of the school, bringing blankets and fold-out chairs ready to show support for the students. Starving from the hike, I watched from behind the window of a local restaurant as I mapped out the rest of the day. It was clear that for a small community, Alamosa had a lot to offer. I then decided to walk around town and soak up the energy. Alamosa is filled with many mom-and-pop shops, restaurants, gift shops, and even a couple of breweries. I made mental notes about which I would be returning to during my stay.

Hot Springs for the Alamosa Alligators

Finishing my stroll, I drove out to Colorado Gators Reptile Park. The area in and around Alamosa is abundant in geothermal springs. This tilapia farm turned reptile refuge utilizes the hot springs as a way to keep alligators (and many other species) year-round. Truly an oasis, the warm waters provide life and make for a fascinating stop.

Beautiful views from the railroad

The Rio Grand Scenic Railroad is located behind the building and was where I had a reservation for a wine tasting and dinner. The two-hour ride aligned with sunset. Golden colors lit up the landscape while dinner and wine rounded out the experience.

The next day, I found myself wrestling my car up towards Zapata Falls. There was a longer trail to the lake which I explored for some time, but the falls themselves were less than a mile in and back.

As I approached Zapata Falls, I found it odd to encounter some hikers coming back bundled and shivering as they hiked down to the lot. Since the falls are fed by snowmelt, and the stream below the falls crosses the trail, you have to wade through the shallow stream to see the falls. Pack an extra pair of shoes and socks (since it’s such a short hike) so you don’t end up shivering like I did! And even if you forget, it was worth it! Since I didn’t have fresh shoes, it was certainly time for me to take advantage of the geothermal springs in the area. I drove back down the dirt road towards what the locals called Hooper Hot Springs.

The recreation center is split into different sections that are fed by the springs. In the front are family friendly pools with concessions and a gift shop. In the back is The Greenhouse, which is filled with tropical plants, hotter pools and a fantastic food and beverage selection. This 21+ serene oasis is where I found myself. I didn’t want to leave. Nonetheless, the sun was starting to go down and I had one more place in mind for sunset.

The Alamosa Wildlife Refuge has options for both walking and driving. Since I had hiked earlier in the day, I decided I’d take my car on the dirt trail through the refuge. The wildlife isn’t as prolific as the autumn cold sets in, but the views are unmatched. Birds flew out from hidden places as the sun gave the Sangre de Cristo Mountains their name. I didn’t want to leave, but this was the perfect way to end my autumn Alamosa adventure: The sun setting with warm embracing colors illuminating the land and roadway back out.

More About the Alamosa Experience